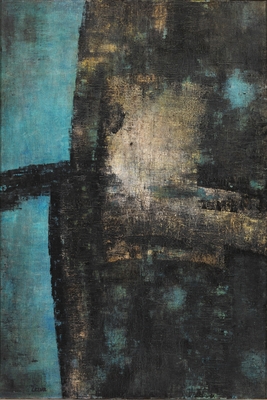 Zerva was born in Volos. She studied painting independently and visited the greatest international art centres of the 1950’s and 1960’s, studying contemporary art masterpieces. After a brief period of experimenting with a more traditional painting language, she turned to minimal abstract expressionism in the 1950’s. Through the use of colour, and its endless possibilities, and a minimal and reductivist manner she created works with great poetic feeling. Zerva presented her work in many solo National and International shows, such as in 1958 at Zygos Gallery, in 1967 at Nees Morfes, in 1971 at the Goethe institute, in 1974 at the Municipal Library, Palazzo Sormani, Milan, in 1974 at ‘Studio Graphical’ Bologna and in 1977 at ‘St Stephan’, Vienna. She also participated in many International group presentations. Just to name a few: in 1961 at the Tunis Biennale, in 1962 at the Contemporary Greek Art, Bucharest, in 1963 at the Alexandria Biennale, in 1963 at the Sao Paolo Biennale, in 1966 at the Exhibition of Contemporary European Painters, New York, in 1967 at the ‘Art Hellenique Contemporain’, Musée Rath, Geneva, in 1968 at Galleria Arte Europa, Bologna and in 1970 at the Venice Biennale. Eleni Zerva together with her sister Maria Hatzigaki, pioneered, as of the late fifties, in the abstract expressionism movement in Greece, and exhibited alongside the likes of Yiannis Spyropoulos and Alecos Condopoulos. Her work can be found in The National Gallery of Greece, The Municipal Gallery of Athens, The Municipal Gallery of Volos, The Greek Ministry of Education and many public and private collections.
Georgios DERPAPAS