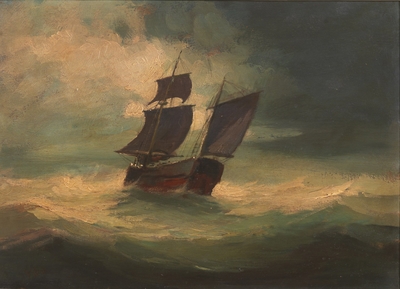 Cosmas Stathis was born in 1869 on the island of Kythira.

In 1887 he enrolled at The School of Fine Arts, Athens, where he studied painting under Nikiforos Lytras, Spyridon Prosalentis and Constantinos Volanakis.

He was one of the earliest art dealers in Greece. During the 1920’s he organised large scale exhibitions in Athens and in the provinces (Volos, Chalkida, Patra, Kalamata), in Asia Minor, in Constantinople and in Egypt. He exhibited the work of his contemporaries and presented their work in the provinces,thereby introducing the idea of art collecting to a wider audience.

From 1931 onwards he had his own gallery space in Athens. In 1993 his private art collection and his own works were donated to The Museum of the City of Athens, where they were then exhibited.
Renos LOIZOU