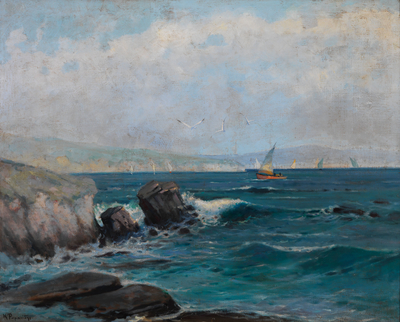 Constantinos Romanides was born in Athens and studied at The School of Fine Art, Athens under Nikiforos Lytras, Constantinos Volanakis and George Roilos.

He was one of the founding members of the "Association of Greek Artists" in 1910. During the war of 1912 - 1913, he fought as a reservist and created some 200 drawings on the battlegrounds of Epirus and Macedonia.

Romanides won the bronze medal at the 1906 International Exhibition in Marseilles. In 1927 he was awarded the prizes of The Royal Society of London and The Academy of Athens. In 1965 he was awarded The Medal of The Ministry of Maritime Union Navy.

Romanides worked mainly on landscapes and seascapes, preferring coastal landscape, following the teachings of French Impressionism. He mainly worked ‘Plein Air’ (in the open air). The present work is a very good example of this genre and tries to capture the romantic mood of nature using pale colours and soft brushstrokes.

His work can be found at The National Gallery, Athens, The Benaki Museum, the Municipal Gallery of Athens and Piraeus, The Museum of the City of Athens, The Museum Lausanne (‘Battle of Navarino’ painting), The National Art Gallery Bucharest, The Belgian Royal Gallery, The Art Gallery of Antwerp and in many private collections in Athens and internationally.
Nikolaos KALOGEROPOULOS