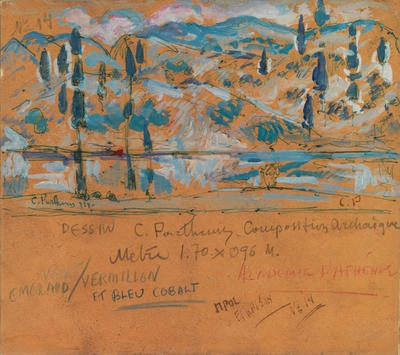 Constantinos Parthenis was born to an Italian mother and a Greek father in Alexandria. In 1895, at the age of sixteen he moved to Vienna where he enrolled at The Academy of Fine Arts and studied under Karl Wilhelm Diefenbach. In this period he also took music lessons at The Vienna Conservatory. In 1903 he visited Athens for the first time and then lived there. In 1907 he moved to Egypt to work on frescos in St George church, Cairo. Between 1909 and 1911 he lived in Paris, where he exhibited his work in various salons which included the Autumn Salon of 1910 where his work ‘Slope’ won a prize. Later he lived on the island of Corfu until 1917 when he moved back to Athens. In 1920 he held a retrospective at Zappeion Hall, for which he was awarded The National Prize in Letters and Arts and thus established himself as an artist, but causing a storm of reaction in conservative, academic circles. In 1929 he accepted a teaching position at The School of Fine Arts, Athens where he taught until 1947. In 1937 his work ‘The Battle of Hercules with the Amazons’ won the gold medal at The International Exhibition of Paris. In 1938 he represented Greece at The Venice Biennale with a retrospective, where his work ‘Annunciation’ was purchased by The Museum of Venice. In 1954 he was awarded the Order of the Commander of King George I and in 1965 the Order of the Gold Commander of the Phoenix. Parthenis is one of the most important figures in modern Greek art, because of his achievements both in painting and for his contribution in teaching. His work has a poetic and dreamlike feeling that is expressed through color and shape on the canvas. It is perhaps no wonder that he shares the same birth place as Cavafis: Alexandria. His paintings are inspired by ancient and byzantine art but also by impressionism and post-impressionism. The influence of the Viennese ‘Sezession’, a movement that originated from the city of his studies, is greatly experienced in his work, especially on his large scale canvases. He fashioned a completely unique and personal style, with which he communicated his ideas and vision into imagery, opening the road for the revitalization of Greek Art.
Polykleitos REGOS