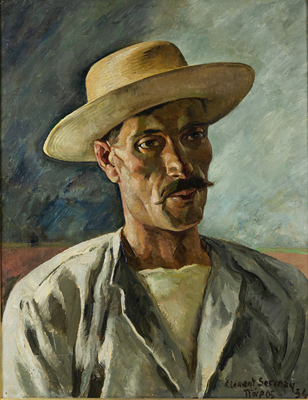 Henri Clement Serveau, also known as Clement-Serveau was a French painter, designer, engraver, and illustrator. Clément Serveau produced works in a realist manner early on, but soon became interested in the new movements. He experimented with Cubism, later in his career turning toward abstraction with a post-cubist stance. He designed banknotes for the Banque de France, produced large murals and participated in numerous French and international exhibitions. In 1934 he visited Greece including Paros Island. This painting of the “Man from Paros” was created during his visit to the Greek island.
Theodoros PANTALEON