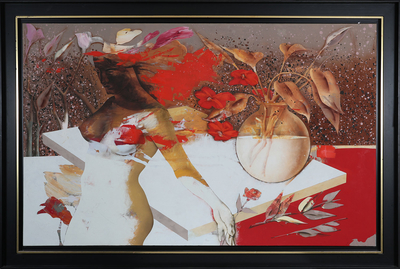 Nymph and Vase with Flowers
oil on canvas


collection of the artist
acquired by the present owner, London

An introduction to the work of Christos Caras by Haris Kambourides on the occasion of his solo exhibition at Gallery K, London, 1999 Fin de siècle What has painting left us at the dawn of the new millennium? Is there any strain running through the flow of fine art production or has the history of art already been cut off and the time of personal vision arrived for artists and art lovers? And what is the art of our era, nowadays that we feel that everything has been done in art. We come across such questions increasingly more often in the work we see, in our silent thoughts or in reviews by art critics. We are going through a crisis, a transitional phase, a quick flight from one opinion to another. We have embarked on an anxious quest for new proposals and yet feel relieved that they have nothing to propose. At the same time, the beginning of the new millennium makes it easier to recourse to the distant past and regard the art of earlier centuries as being closer to us. Everything is laid out before us: in the books, on television, on the internet and it is mainly the hungry eye which asks to devour images, painted or not, seeking an anchor and more defined criteria. And all things look as fragments of something more complete of which we are not yet fully aware, yet we feel that it will take a name soon. It is the fin de siècle and perhaps everything is seeking to find again its balance everything is seeking to find again its balance on some invisible axis; like the figures in the paintings of Christos Caras. Could it be the vases that stand upright even when placed on tilted tables? Could it be his distinctive leaves which are poised as if they have been awakened by the morning dew? Or could it be the sculpted sightless faces? Then again it might be the conical tubes that loom around the faces. These were some of the things I wondered about before I even saw the work of the acclaimed painter in his studio. In my luggage I carried many pictures of his work and many apt remarks made by well-known art critics on the artists oeuvre. But I also carried with me the unfailing concern for the faith of all modernists, post-war artists of the ‘60s and my own doubts as to whether I had succeeded in comprehending the artist’s world in my earlier reviews. In the next painting, another woman, much resembling Aphrodite of Milos, is propped up on a table on which we see once more the familiar spherical vase, again upright despite the peculiar slanted perspective which propels all the figures in the composition sideways on the painted surface. A great deal of the same bright red seems to have been blown by the wind onto the chest and hair of the Muse and then it sweeps past her colouring the flowers too. Once again, we observe the interplay of ‘free’ colour and ‘confined’ form, of the bird in the cage, one might say, remembering the analogy painters so often quote when speaking about their art on a deeper level. hidden pulsations in the frozen time Whence does the wind blow, carrying along with it the red colour and the white too, which covers the front of the female figure and the table? The sense of movement in this painting and in most of the others originates from many sources, but we never find out what they are. We can sense them from the many invisible points of reference, from the slanted tables and from the wind. Biographical note Christos Caras was born in Tricala, Greece. He studied at the School of Fine Arts, Athens painting under Yiannis Moralis and Andreas Georgiades, and sculpture under Yiannis Papas, graduating in 1955, between 1957-67, he studied Fresco in Paris, in 1973 continued his studies in New York In 1976 he founded the Association of Greek Artists.   He held many solo exhibitions in Greece and internationally such as in 1967 at Forsythe, USA, in 1978 at Richard Foncke, Belgium, in 1979 at Salon International Bale, Basil, in 1982 at Maison de la Grèce, Paris, in 1984 at The Venice Biennale (with Andreas Georgiades), in 1985 at Gelerie am Kurfurstendamm, Berlin, in 1987 at Trosa Kvarn, Sweden and in 1990 at Metropolis Art Galleries, New York. His work can be found in The National Gallery of Greece, The National Museum of Contemporary Art, Greece, The Macedonian museum of Contemporary Art, The Municipal Gallery of Rhodes, and many other public and private collections.
Pavlos SAMIOS