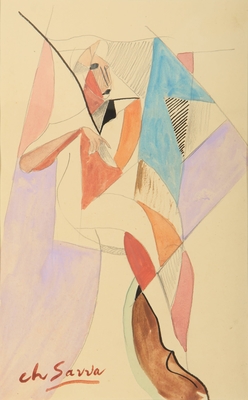 Nude
pencil and gouache on paper

Savva was born in Marathovouno in 1924 and died in Sheffield in 1968. He served at the Cypriot Regiment during The Second World War. In 1947 he moved to London and studied at St. Martin’s School of Art and Heatherley’s School of Art. He returned to Cyprus in 1953, but in 1956 he left for Paris, where he studied at André Lhote Academy until 1959. In 1955 he founded the “Art-Lovers’ Society” and in 1960, after his return to Cyprus, he co-founded Apophasis Gallery with Glyn Hughes, an important cultural centre of the newly-founded Cypriot Democracy. He has shown his work in a number of solo exhibitions. In 1954 at the British Council Hall, Nicosia, in 1955, 1957, 1959 and 1960 at Ledra Palace Hotel, Nicosia, in 1956 at ‘Art-Lovers’ Society’, Nicosia, in 1958 at the Municipal Hall of Limassol, in 1961, 1962 and 1963 at Apophasis Gallery, in 1962 at Beirut and Municipal Hall of Paphos, in 1965 at Municipal Hall of Nicosia, in 1967 at Hilton Hotel, Nicosia and at Goethe Institute, Nicosia. Savva took part in several group exhibitions: in 1958 at Mariac Gallery and Jordan Gallery, Paris, in 1960 in Beirut, in 1967 at The Panhellenic Exhibition, in 1968 at Venice Biennale, in 1962 in ‘Art in the Commonwealth Today’, The Commonwealth Institute, London, in 1970 in ‘Contemporary Cypriot Art’ at The Commonwealth Institute, London, in 1979 at ‘Demetria’ of Thessaloniki, and at ‘Contemporary Cypriot Painting’ at Athens National Gallery. The female nude was a major subject of study for Savva during his time at the André Lhote Academy. This work is from this period. Savva here intervenes on the external appearance of the nude female body, isolating it from its natural surroundings and reveals an inner new dimension or reality. In this manner we experience Savvas’ personal view of his subject-matter.
Giorgio De CHIRICO