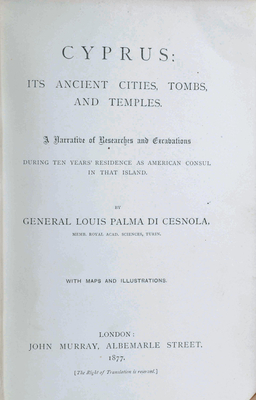 Cyprus: Its ancient cities, tombs and temples
A Narrative of Researches and Excavations during ten years’ residence as American Consul in that island

Luigi Palma di Cesnola was an Italian-American soldier, diplomat, and amateur archaeologist. After a military career in both Europe and the American Civil War, Cesnola was appointed American consul in Cyprus in 1865 a position he held until 1877. During his years in Cyprus through extensive excavations especially around the archaeological site of Kourion, he amassed an unrivaled collection of Cypriot antiquities. His collection now commonly known as the “Cesnola collection” was purchased by the newly expanded Metropolitan Museum of Art in New York in 1872. In 1877, he accepted a place on the Museum’s board of trustees and served as its first director from 1879 until his death in 1904. The Cesnola Collection remains a wonderful storehouse of ancient art and artifact, and it is by far the most important and comprehensive collection of Cypriot material in the Western Hemisphere. The objects illustrate the unique character of Cypriot art and highlight the exotic blend of Greek, Near Eastern, and Egyptian influences in Cyprus.
Baptistin POUJOULAT