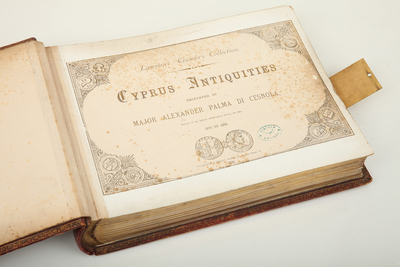 .
AUTHOR
Major Alexander Palma di Cesnola
.
YEAR
1881
.
NOTES
This copy is signed by Alexander Palma di Cesnola himself.
Signed and dated Londra, 20 Febbraio 1881, A. P. di Cesnola.
.
It contains 63 albumen photographs, 62 photographs of objects in the collection and a photograph of a map of Cyprus.
It also contains 38 letterpress leaves, the majority with printed English text, 31 mounted on the verso of plates and 7 at the end. On 34 of these leaves there is handwritten translation in the Italian language. The handwritten Italian translation is believed to be by Cesnola himself.
.
An early very rare photographically illustrated catalogue of the Cesnola Collection, one of the most significant collection of Cypriot antiquities ever assembled.
the Online Computer Library Center locates but 12 copies, with this copy being unique from the rest due to the Italian handwritten translation and the Cesnola signature.
Cover elaborately decorated in gild with metal clasp and latch.

Alexander Palma di Cesnola (also known as Alessandro Palma di Cesnola) was the younger brother of the more famous General Luigi Palma di Cesnola. Luigi Palma di Cesnola served as the American Consul in Cyprus from 1865 to 1874 and later as director of the Metropolitan Museum in New York. In 1873 after a military career where he saw service in the Crimea, Italy, and America, Alexander followed his brother to Cyprus. There he served as honorary United States Vice Consul. Just like his brother Luigi, Alexander who was an archaeologist, amassed a large collection of antiquities in Cyprus. In partnership with the London financier Edwin Lawrence (1819–1891) during the period between 1876 and 1878 he excavated and collected many Cypriot artefacts. These came principally from around the Salamis area but also from Kourion, Soli, Marion and other places. In disregard to the ban on private excavations instituted by the first British High Commissioner in 1878, he conducted illegal excavations and attempted to export antiquities without a license, which resulted in prosecution and the confiscation of part of the collection. At first Alexander Palma di Cesnola attempted to sell his collection to the British Museum and Victoria & Albert Museum, who both declined his offer, so he then disposed of most of the collection at auctions in London during the 1880’s and 1890’s. Many items of the Cesnola – Lawrence collection sold at these auctions eventually made their way into public museums and private collections across the world.
ILLUSTRATED LONDON NEWS