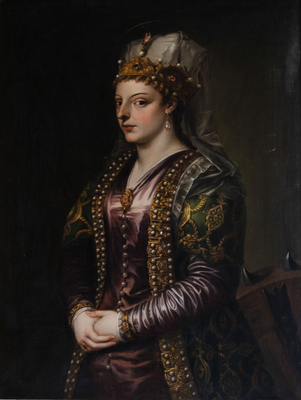 In 2002 a full and detailed analysis of the painting was commissioned by the present owner. This 5-page detailed report is available to download here. The layer structure, the materials and paint pigments used were examined and analyzed. The report concluded that the date of creation of this painting was the mid-18th century. This fine, detailed portrait of Caterina Cornaro is based on the 1542 original by Titian, now in the Uffizi Gallery in Florence. Even though Bellini, Giorgione and Dürer, are also known to have painted her, this portrait by Titian is the best-known depiction of Caterina Cornaro. In the painting she is represented as Saint Catherine of Alexandria with her martyrdom attribute, a wheel, shown lower right in the background. Cornaro is depicted here wearing a magnificent open coat with gold embroidery adorned with pearls and a silk dress also adorned with pearls. On her head there is a golden crown with a veil, decorated with precious stones and pearls. Caterina Cornaro (1454 -1510) was the last monarch of the Kingdom of Cyprus who reigned from 1474 to 1489. She was the daughter of Venetian Marco Cornaro and Fiorenza Crispo. The Cornaro family had produced four Doges. She became queen consort of Cyprus by her marriage to James II of Cyprus in 1472. A few months after her marriage James II died and Cornaro eventually became queen regnant of Cyprus in 1474. She ruled until 1489 at which time she was forced to abdicate and cede her rights as ruler to the Doge of Venice.
George SKOTINOS