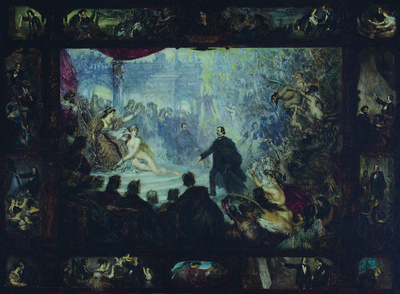 Apotheosis of the artist Wilhelm Von Kaulbach
oil on canvas

Carl Theodor Von Piloty was born in Munich. He was the son of Ferdinand Piloty (d. 1844), a lithographer of great repute. In 1840 Von Piloty enrolled as a student at the Munich Academy, under the artists Schorn and Schnorr. After a journey to Belgium, France and England, he commenced work as a painter of genre pictures, and in 1853 produced the work Die Amme (The Wet Nurse), which, on account of its originality of style, caused a considerable sensation in Germany at the time. But he soon forsook this branch of painting in favour of historical subjects, and in 1854 produced The Accession of Maximilian I to the Catholic League in 1609 for King Maximilian II. It was succeeded by Seni at the Dead Body of Wallenstein (1855), which gained him membership of the Munich Academy, where he succeeded Schorn (his brother-in-law) as professor. Among other well-known works by Piloty are the Battle of the White Mountain near Prague, Nero Dancing upon the Ruins of Rome (1861), Godfrey of Bouillon on a Pilgrimage to the Holy Land (1861), Galileo in Prison (1864) and The Death of Alexander the Great (unfinished), his last great work. He also executed a number of mural paintings for the royal palace in Munich. In 1874 he was appointed keeper of the Munich Academy, being afterwards ennobled by the King of Bavaria. Piloty was the foremost representative of the realistic school in Germany. He was a most successful teacher, and among his more famous pupils may be mentioned Nikolaos Gysis, Nikiforos Lytras and Georgios Jakobides.
Renos Evriviades WIDESON