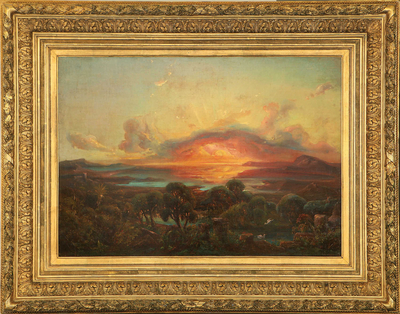 Carl Anton Joseph Rottmann the most famous member of the Rottmann family of painters was a German landscape painter. He was a member of a circle of artists around King Ludwig I of Bavaria (father of King Otto of Greece), who commissioned large landscape paintings exclusively from him. Rottmann received his first drawing lessons from his father, Friedrich Rottmann, who taught drawing at the university in Heidelberg. He formed himself chiefly through the study of nature and of great masterworks. In his first artistic period, he painted atmospheric phenomena. In order for Rottmann to enhance his repertoire, in 1826/7 King Ludwig I of Bavaria sponsored Rottmann’s travels in Italy. In 1834 Rottmann travelled to Greece to prepare for a commission from King Ludwig. Of his Greece paintings, Ammer Lake and Marathon are in the National Gallery, Berlin; The Acropolis of Sikyon and Corfu in the Pinakothek, Munich; others in the Schack Gallery, Munich, and in Karlsruhe and seven in the Leipzig Museum.
Alexandros ALEXANDRAKIS