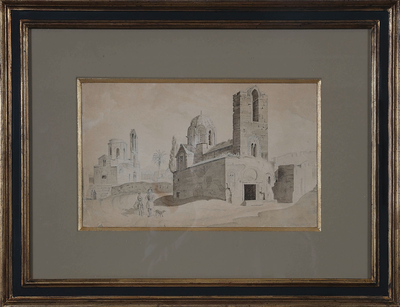 The churches of Taxiarhon and Profitis Elias
watercolour on paper (brunaille)


private collection, Greece
Note
The churches of Profitis Elias and Taxiarhon built in the 12th century was located in the Roman Agora of Athens. These churches were demolished in 1852 during the archaeological excavations of the area.
As these churches were demolished so early there are only a few works of art depicting them making this watercolour a rare documentation.
This work of art is done on ‘WHATMAN TURKEY MILL’ artist’s paper bearing the appropriate watermark. This particular watermark places the making of the paper to between the mid-1820s and the early 1840s as this was the period in which the Whatman Paper Company produced this paper.