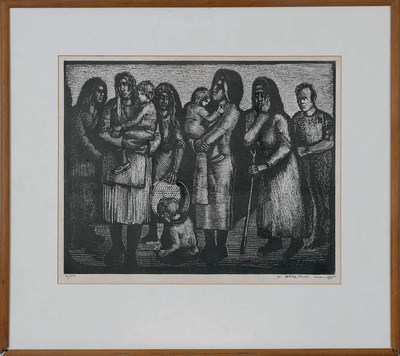 Kostas Averkiou was a self-taught painter and engraver. After finishing primary school Averkiou worked as a carpenter alongside his father, developing relevant skills for his career that followed as an artist. In 1945 he set up his own workshop in Nicosia. He worked mainly as a sign-maker and designer of commercial posters. Averkiou devoted much of his time to oil-painting and engraving, the latter of which he learnt from Telemachos Kanthos. By 1957 he was considered an esteemed engraver. Averkiou exhibited his work in a number of solo exhibitions which included shows in 1971 in Athens and in 1972 in Nicosia. Additionally he participated in numerous group exhibitions, such as: The Pancyprian Art Exhibition, 1947, Apophasis Gallery, 1955 and 1956, The VI International Moscow Festival, 1957 (where he was awarded a prize), The Exhibition of Eighteen Cypriot Artists, Athens, 1962, The 1963 Alexandria Biennale and The 1972 Venice Biennale. His work can be found in numerous public collections such as: The State Gallery of Contemporary Cypriot Art, The Bank of Cyprus Cultural Centre Foundation, The Leventis Gallery, The Archbishop Makarios III Cultural Centre Foundation and so on.
Andreas MAKARIOU