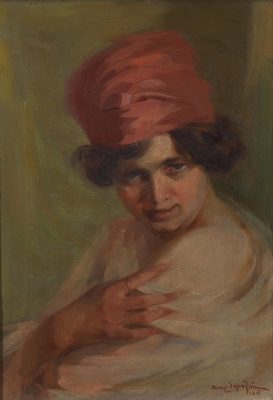 Portrait of a young lady
oil on canvas

Apostolos Geralis was born on the island of Mytelene and died in Athens. In 1896 he enrolled at The School of Fine Arts, Athens, where he studied painting under Dimitrios Geraniotis, Spyros Vikatos, Georgios Jakobides and Georgios Roilos. Between 1910 and 1915 he held a teaching position at the Pancyprian Gymnasium, Nicosia and later, between1919 and 1920 he continued his studies in Paris, at The Julian Academy. His work belongs to the sphere of academism influenced by both the Munich and the French Schools. Geralis held a number of solo exhibitions in Athens and participated in a number of group exhibitions such as the 1934 Venice Biennale. His works are found in many public and private collections, notably: The National Gallery, Athens, The Athens Municipal Gallery, The Leventis Gallery, Nicosia, The Koutlides Collection and The National Bank of Greece. Portrait of a young lady is a very romantic and unusual Art Deco period work by Geralis.
Maria FILOPOULOU