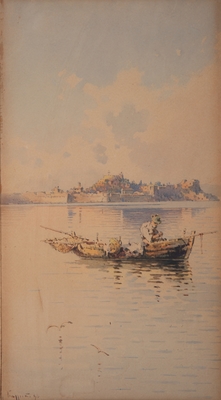 Around 1886 he met British ambassador Ford, who became a great patron of his work. Ford commissioned seven albums with scenes of Greece, Venice and Spain. He also organised exhibitions for Giallina in Athens, London and Spain and introduced him to European royal circles. Later in life Giallina exhibited in Berlin and Paris.

Between 1907 and 1908 Giallina worked on frescos in the Achilleion, the summer residence of Elisabeth of Bavaria, also known as Sissy.