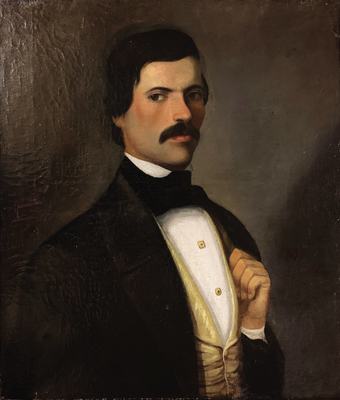 The portrait of Pantaleontas Costaki
oil on canvas

NOTE The portrait of Pantaleontas Costaki at the age of 24. Pantaleontas Costaki, was the nephew of Benizelos Roufos, a Greek politician who eventually became prime minister of Greece twice in 1863 and in 1865. Andreas Kriezis was born in Hydra island around 1813. He was born into a well known and respected family of merchant marines. Instead of following the family tradition of seafarers he went to Athens, where he worked at the Royal Printing House as a lithographer.In 1839, he went to Paris, where he first devoted himself to improving his skills as a lithographer but eventually turned to painting instead. After his return to Greece, Andreas Kriezis taught at the high school of Ermoupolis in Syros from 1851. Although mainly known as a portrait painter in most part of persons from the aristocratic families of the islands he is also know to have painted naval scenes as well as icons and murals at the church of Agia Irini in Troizina. Even so, it is worth noting that are only a few known surviving works by Kriezis. Andreas Kriezis took part in several exhibitions including the Olympia exhibition at Zappeion Athens in 1859 and 1875 as well as the Paris Exposition Universelle in 1867. Kriezis is generally believed to have died sometime between 1877 and 1880.
Pericles BYZANTIOS