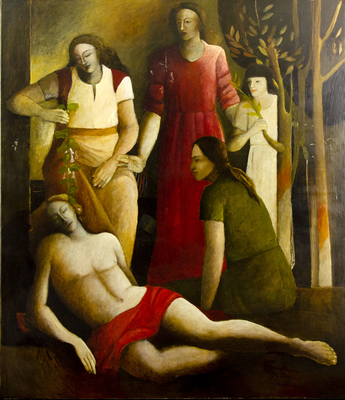 
register a bid
NOTES Charalambides studied at the Leeds School of Art under Sir Terry Frost, RA, and has since been developing a career of international standing, based in his native historical town of Paphos. He has built a reputation as a figurative painter of the Cypriot generation of the 1960s. His paintings are composed and executed with the skill of an Old Master, yet they are unmistakably modern. He has forged his own unique pictorial language, which is essentially steeped in the diachronic Mediterranean culture. The Italian 16th and the Dutch 17th century, the early works of Picasso and Modigliani, the Medieval frescoes and mosaics of Sienna and Paphos, and most of all the myths and legends of Hellenism are his main points of reference. The imagery and atmosphere bear an element of magic and archetypal metaphysical energy and is articulated with frugal forms and a strict palette, where golds and browns are used to model and accentuate selected details and key figures. He held more than twenty solo and more than twenty group exhibitions in Athens, Nicosia, London, Alexandria, Beirut, Baghdad, Kuwait, New Delhi, Amsterdam, and New York. His work can be found in many public and private collections in Cyprus and abroad. Notably at The State Gallery of Contemporary Cypriot Art, The Limassol Municipal Gallery, The Paphos Municipal Gallery, The Bank of Cyprus Cultural Centre Foundation, The Central Bank of Cyprus Art Collection, and The Archbishop Makarios III Foundation-Cultural Centre.
Lefteris OLYMPIOS