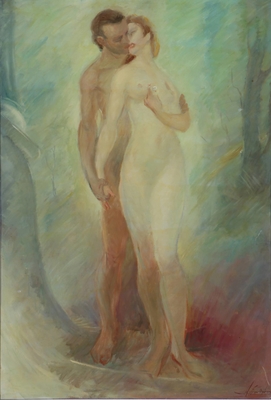 The definitive collection of more than 100 works depicting the nude in sketches, etchings, drawings, watercolours and oil paintings from 1937 to 1958 by Alexandros Alexandrakis was shown for the 1st time to the public in 1998 at Gallery K, London. A book titled The Nude accompanied the exhibition. Art Historian and Critic Terence Mullaly, writes in the introduction “The life force pulses through the work of Alexandrakis, indeed because of his paintings and drawings he often touches emotions making the blood tingle, he is among the best known and most loved Greek artists of the 20th Century.’ Alexandrakis was to go beyond the dexterity and joie de vivre displayed in the 1949 paining of Asma Asmaton II. The versatility this painting displays, together with the fusion of intellectual concerns and the full-blooded expression of emotions, conveys Alexandrakis' ability to touch different levels of awareness. He is concerned with basic human emotions. He could conjure both compassion and passion. The female body is commemorated.
Pericles PANTAZIS