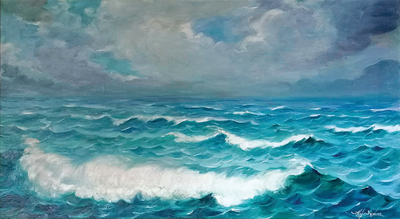 Alexandrakis graduated from The School of Fine Art, Athens in 1937, having won all the major art awards; those of Portrait, Nude, Semi-nude and Composition. His achievements are considered unique in the history of the annual prize of the school. Alexandrakis is an artist of international repute, having forged a strong reputation in the USA where he regularly submitted work to The Guggenheim in New York for its annual exhibition. In 1950 he submitted two works for the design of a poster for the Marshall Plan, organised by the American Government. He won the first and second prize. Seascape is a rare thematic work for Alexandrakis, the turbular nature of the sea and skyscape of the work perhaps reflects the mood of the veteran artist after having served in the Second World War. His work can be found in many public and private collections in Greece and Cyprus. Notably at The National Gallery Greece, The Municipality of Athens, The State Gallery of Contemporary Cypriot Art, The Leventis Gallery, The Bank of Cyprus Cultural Centre Foundation and The Hellenic War Museum.
Maria FILOPOULOU