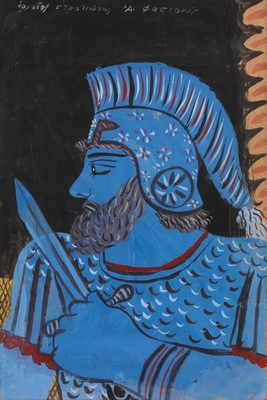 The ancient soldier
acrylic on paper laid down on card

As noted by Marina Lambraki-Plaka ‘Alecos Fassianos belongs to the generation of those who inherited heliocentric modernism. His youthful works were influenced by French art informal. But he quickly found his own personal style. Ancient vase painting, vernacular art and the teaching of Tsarouchis assisted him in composing a code genetically programmed to convey a message of vital well-being and optimism.’ (Marina Lambraki-Plaka, National Gallery, 100 years, Four Centuries of Greek Painting, Athens, 1999, p.515). Fassianos work can be found in The National Gallery of Greece, The Municipal Gallery of Athens, The Averoff Gallery, The National Bank of Greece, Musee d’Art Modern, Paris and many other public and private collections.
Kelly MENDRINOU