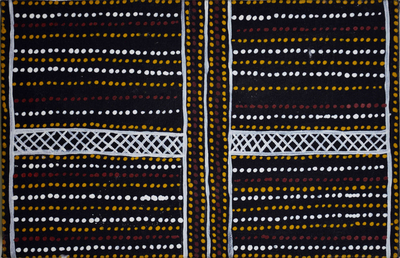 During ceremonies on the Tiwi Islands ceremonial dances are performed. During these ceremonies the dancers bodies and faces are painted in different natural ochre colours in various designs. Collectively these designs are called “Jilamara” Francesca Puruntatameri was born on the 2nd of July 1965 Since 1994 her work has been shown in numerous exhibitions Skin: Wantaringuwi – Sun/Fire Region: Bathurst Island, Northern Territory
Andreas CHRYSOHOS