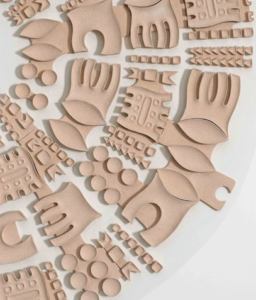 Valentinos Charalambous was born in Famagusta in 1929.

His father, Christos Charalambous, was a very well known traditional potter. Near his father, Valentinos was introduced to the art of pottery and he went to England for further studies.

From 1948 to 1951 he studied at Central School of Arts and Crafts in London with Dora Billington and Gilbert Harding-Green and in Cornwall with Bernard Leach.

During the year of 1951 he remained in London and worked as an assistant at the Central School of Arts and Crafts.

In 1952 Valentinos Charalambous returned to Cyprus and worked with his father until 1957.
In 1957 he was asked by the Ministry of Education of Iraq to undertake the establishment of the Department of Ceramics at the Institute of Fine Arts in Baghdad.

In 1960 he organized the establishment of the corresponding department at Tahrir Female College in Baghdad and in 1967 he was recruited by the Academy of Fine Arts of the University of Baghdad to establish the corresponding ceramics department, which he headed up to 1983.

In 1985 he returned to Cyprus but maintained close relations with Iraq.

In 1987 he was honoured by the Iraqi government for his contribution to the country’s culture as a teacher and artist.

He has been working for the Cultural Services of the Ministry of Education and Culture since 1988 and is responsible for the cultural relations between Cyprus and Arab countries.