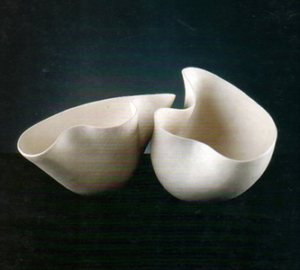 Tina Vlassopulos stands out as one of the most engaging of hand builders.
The apparent simplicity of her pots reflects the nature of a maker who has no interest in rhetoric or theorising.

She was first drawn to clay because of its inherent lack of pretension – here was a type of creativity, which would allow her to work out ideas through her materials and she is content to be considered “just a potter” in that sense.

Tina Vlassopulos hand-builds, using red earth-ware or stoneware, which she occasionally decorates with oxides. She enjoys using slips, but her major preoccupation in the nineties has been with burnished earth-ware, which is free of decoration. They are essentially very organic pots, whose richness of colour and expansiveness of form might suggest the warm Mediterranean rather than the cold North. Each pot has its own wave like rhythm, a motion in the body and rim that may curve inwards and upwards.