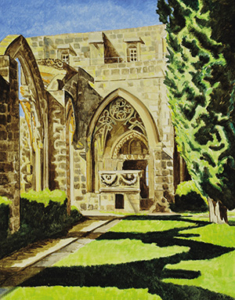 Susan Kerr was born in London and studied painting, art history and graphics at The Bath Academy of Arts and continued her studies at Leicester University to study Art Education.

In 1966 Kerr married Costas Joachim and moved to Cyprus where she settled in Bellapais, the birth place of Joachim. Together they established their working art studio and gallery until forced to leave in 1974.

Between 1974 and 1977 she lived in London and Athens, and then returned to Nicosia, Cyprus. In 1984 together with her husband they established the new Bella Pais Studio where they work until today.

Susan Kerr taught English from 1975 and Visual Arts from 1987 at the American International School in Cyprus until she retired in 2008. She has also written and designed exhibition catalogues for Bellapais Studio and Gallery, as well as the book Dialogue with the Surface’ on Costas Joachim’s life and art.