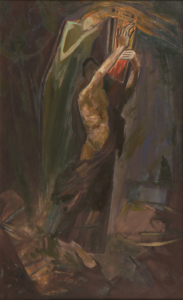 Nikolaos Santorinaios studied at The School of Fine Arts, Athens under Georgios Iakovides and Nikiforos Lytras. After graduating he moved to Egypt.

In 1910 he returned to Greece. Initially he worked on frescoes in many churches in Corinthia, Peloponnese. He later taught in secondary education.

Santorinaios works include landscapes, portraits and religious subjects. His work evolved from realism to expressionism.

Work by Nikolaos Santorinaios can be found in The National Gallery of Greece and many other public and private collections.