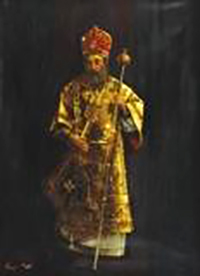 Nicos Nicolaides was born in Nicosia in 1884, and lived in Cairo until his death in 1956.

He received his first drawing lessons from the icon-painter Theocharides, and at the age of fourteen he started to travel around Cyprus painting icons. In 1907, at the age of twenty-three, Nicos Nicolaides enrolled as a student at the Polytechnic University of Athens. Two years later he went to Italy to study painting and then travelled around Europe, North and South Africa and Middle East. In 1923 he settled permanently in Egypt, where he developed his talents in both painting and writing.

He presented his first one-man exhibition in 1919 at the Liberal Association in Limassol. Two more followed in 1929 at the Hellenic and Alexandria Centre in Cairo and at the Circle Hellénique of Alexandria.

His work can be found in the State Gallery of Contemporary Cypriot Art; the Municipal Gallery of Limassol; Limassol Metropolis; The Nicosia Greek Schools’ Board of Governors. It is also in several private collections in Cyprus, Greece and Egypt. His icons still adorn the churches of Alona and Ayia Triada in Limassol, Limassol Metropolis, Prodormou in Larnaca, Saint Catherine’s Monastery of Sinai. And the George Skyranidi Collection.