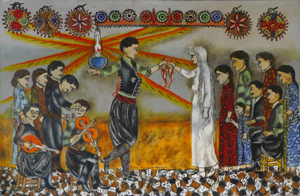 The most renowned naïve artist of Cyprus, Kashalos or Kkashalos depicted the customs, traditions and rural life of the island through a unique and eloquent style. Michael Kashalos took up painting at a late stage in his life due to encouragement from the artist Adamantios Diamantis, who was impressed by his counterfeit antiquities.

His work was exhibited in London at the Commonwealth Institute in 1970 and at the Triennale of Bratislava in 1969 where he won a prize.

He was born in Assia village in 1885. As a student at the elementary school of his village he studied icon-painting under the iconographer Kyriacos Pieridis. He became a show-maker and worked until the Second World War, and then he was occupied with making copies of ancient finds and creating decorative objects made of plaster and glass.

After 1957 Michael Kashalos was devoted to painting. In August of 1974, he was wounded during the invasion of the Turkish Army in Cyprus and died as a refugee in Larnaca in December of 1974.
He is regarded as the father of contemporary Cypriot Native art.

He took part in several group exhibitions: in 1963 at Panhellenic Exhibition; at the 2nd Triennale of Naïve Art in Bratislava; in 1970 at Pancyprian Exhibition; in 1973 at “Exhibition of the Artists of Famagusta”; in 1978 at the exhibition of “Three Cypriot Naïve Artists (Kashalos, Argyrou, Yerocostas)” which took place at National Gallery of Greece and in the same year at Municipal Museum of Munich.

His work can be seen in public collections of State Gallery of Contemporary Cypriot Art, the Cypriot Folk Art Museum, the Cultural Centre of Popular Bank and in private collections.In 1969 he was honoured with the Bratislava 2nd Triennale of Naïve Art Award and in 1974 with the Posthumous Athens Academy Award.