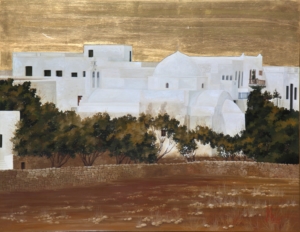 Markos Venios was born on the island of Folegandros.

Venios’ work is greatly influenced by Byzantine art. His inspiration and themes come from his birthplace, Folegandros or from the Cyclades more generally.

In his work one sees that Markos Venios successfully combines the spirit of Byzantine tradition with the naïve spirit of traditional folk art.

Through the traditional technique of Byzantine iconography, particularly the use of gold or silver leaf, he succeeds in conveying a personal and spiritual interpretation of the Greek landscape.

Most of Venios’ work centres around realism and light. His works are often self-luminous, where the contrast between background and foreground fills the entire composition.
In his work, one can see the reflection of a divine beauty and a quest for paradise. His paintings always evoke the experience of a world presented through an ethereal sentiment.

His work can be found in: The National Gallery of Greece, The Municipal Gallery of Athens and many other public and private collections.