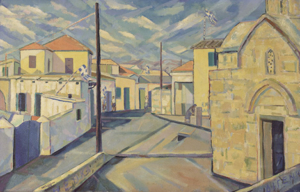 Lefteris Economou was born in Frenaros village of Famagusta in 1930.

He graduated from the Famagusta Gymnasium in 1948. From 1949 to 1950 he studied Fine Arts at St. Martin’s School of Art in London, at Sir John Cass College from 1950 to 1954 and then he continued from 1954 to 1955 at Goldsmith’s School of Art of London University under Paul Drury (painting), John Bowles (engraving) and B. Coppnall (sculpture). In 1953 he received the N.D.D. with speciality on painting. In 1955 he returned to Cyprus where he worked as a teacher of art and technical drawing in secondary schools.

He has been awarded a number of prizes and distinctions: Teukros Anthias and Theodosis Pieridis award 2000, The Republic of Cyprus awards for his artistic contribution 2002 and The Leonardo Da Vinci award, 2006.
His work has been published in various important publications worldwide.

The artist paints the Cypriot landscape and the daily lives of Cypriot people with passion and virtuosity.

His work can be found in public and private collections in Cyprus, Greece, United Kingdom, America, Europe, Canada, Australia, Japan and elsewhere. Three of his works of large dimensions adorn the 1st Kykkos Lyceum, Strovolos Lyceum and the Makarios Hospital in Nicosia.