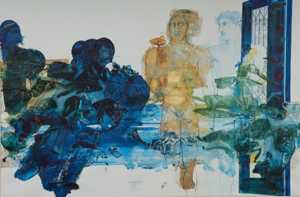 Konstantinos Giannikouris was born in Paphos in 1939.

After his graduation from the Paphos Gymnasium in 1957, he went to France to study painting, fresco, mosaic, lithography, engraving and tapestry at the National School of Fine Arts in Paris. He lives and works in Paris.

Giannikouris also participated in many group exhibitions: in 1970 at Argo Gallery in Nicosia; in 1974 at Salon des Réalités Nouvelles in Paris; in 1977 at the Salon “The Art inside the city” in Billom; in 1979 at the exhibition “Cypriot Art” in Thessaloniki; in 1981 at the touring exhibition “Cypriot Art” in Belgrade, Bucharest and Sophia; in 1984 a the National Gallery in Athens; in 1985 at the FDAC Markets in Clemond-Ferrand and at the Annick Glass Gallery in Billom with a “retrospective Exhibition”; in 1986-1989 at the “Retrospective Exhibitions” of FDAC; in 1990 at “Cyprus, 9.000 yeas of Culture” exhibition in Tours and at the 1st International Salon of Fine Arts in Valognes; in 1992 and 1993 at the Gallery of Modern Art in Vichy; in 1994 at the “Cypriot Painting” exhibition in Hague; and in 1995 at the Cultural Centre Animatis in Issuar and at the Vichy University titled “The Image”.

He executed several monumental works. Among them the most important are: in 1963 a fresco in Paris; a mosaic in La Fléche ordered by the French Government; in 1972 a mosaic at the Ayios Andreas Elementary School in Nicosia; in 1971 a mosaic ordered by the French Government for a school block in Betigny sur Orge; in 1972 one more mosaic at the Acropolis Gymnasium in Nicosia, at Paphos Beach Hotel in Paphos; at the Cyprus Hotel Administration School at Philoxenia Hotel in Nicosia; in 1974 a mosaic floor at a Technical Lyceum in Bretigny sur Orge ordered by the French Government; in 1977 mosaic floors at the Cultural and Conference Centre and a mosaic at the entrance of the building in Clermond-Ferrand; and in 1979 a painting on wood at the entrance of an apartment block of UAP Les Avernes in Clermond-Ferrand.

In 1990 he received the Jean – François Millet award at the 1st International Salon of Fine Art in Valogues. His work can be found in public and private collections in Cyprus, Greece, France, England, United States, Australia, Holland, Germany and many other countries of the European Union.He has executed more than fifty tapestries of large dimensions in France, Cyprus, England and Australia.