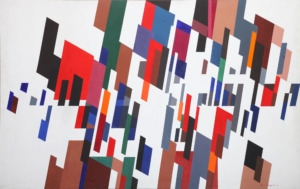 Katy Stephanidou was born in Limassol in 1925.

She studied at the Higher School of Fine Arts in Athens under Yiannis Moralis from 1948 to 1955 and from 1956 to 1960 she continued her studies at St. Martin’s School of Art in London. She worked as an art teacher at Secondary Schools in Cyprus.

Her work can be seen at the State Gallery of Contemporary Cypriot Art, at Thessaloniki University, at the National Bank of Greece, at Andros Gallery and in several private collections in Greece, Cyprus and England.