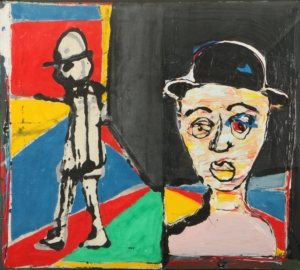 John Kiki, born in Cyprus, studied at the Camberwell School of Art, and now still considers himself a “young” painter for whom financial necessity had dictated that he spent many years away from canvas, paint and gallery.

For long years at a stretch, the world of the seaside restaurant precluded all thoughts of the world of art. It was not until 1981 that he again took up painting as a regular activity and in an interview with Keith Patrick in 1993, he suggested that his painting was influenced by the funfair at the seaside at Yarmouth, by the bright lights, the movement, the artificial colours. These qualities, and a kind of controlled wildness, are all apparent in his work.

The influences on his work are many and varied. There are elements of Jackson Pollock (Dancing Together, 1990, Dancers on White, 1991) Francis Bacon (Weight lifter 1990191) Bacon/Velasquez (Disturbed Lady in a Chair, 1991); Matisse (The Round Dance, 1994) Other acknowledged influences are Euan Uglow, de Kooning, Baselitz, Picasso, the abstract expressionists, the list is endless.

However, the “greatest and most lasting influence” was, in his own words, his teacher, Frank Auerbach, who, together with pop artist Patrick Procktor, made him “rethink his strategy,” to develop from the tight, measured style of his early work, into the looser, fluid style which currently typifies his work. Under their influence, he began to use drawings and magazine pictures as guides and references for his work, abandoning the life model and the careful precision, which this implied.

He paints rapidly, totally involved with the act of mark making, canvases spread out on the floor. He insists that “the subject matter doesn’t matter; There is no message.” Be that as it is debatable – there is always the glorious paint.

In 1972 he had a one man show at the Royal Academy – and sold most of the work. He has shown at the Tate, the Serpentine (1 982) and the Hayward.
He was also one of the Nine English Painters in the Munich Exhibition, 1981, and between 1992 and 1994 worked on the Carmina Burana Experience. In 1988 he was the subject of a BBC television documentary, “John Kiki”, directed by Franco Rosso.