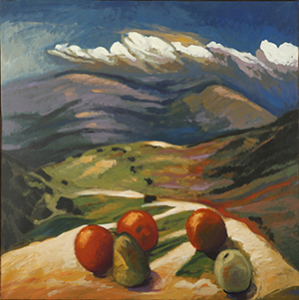 She studied engraving at The Academy of Fine Art, Athens (1965-9) and later she continued her studies at The Croydon College of Art (1973-5).

The well-known Greek painter Hero Kanakakis was based in Athens, but she lived and worked in London for fifteen years, between 1973 and 1989.

After spending a few years studying, living and working in the United Kingdom, she returned and settled in Athens, in 1989 and taught drawing at The Vakalo School.

Kanakakis started off in the sphere of critical realism, interspersing reality with surrealistic figures and associations in a bid to find the poetry behind appearances. Her paintings gradually became more abstract, the colours more violent, and the limits of the canvas were frequently exceeded with assemblages of a variety of surfaces.

The paintings have been inspired by an extended stay of the artist in the mountains of Pelion, in the heart of the Greek mainland. In these works, Kanakakis is drawn to more abstracted and fragmented compositions through contrast and tension of forms and intensity of colours. Lingering between real and dream space, these images are populated with strange anthropomorphic creatures and animals. Fragmented shapes allude to real objects – the head of an animal, miscellaneous human parts, the contour of a window, flowers in a garden, parts of an interior – and simultaneously retain and deny any references to the exterior reality.

Kanakakis exhibited her work in more than ten solo exhibitions, in Athens, Paris, London, and elsewhere, some of them open air, such as the Argos Festival in 1996 and Tourkovounia in 1997.

Additionally, she participated in a number of group exhibitions, such as The Panhellenics in 1975 and The Paris Biennale in 1980.