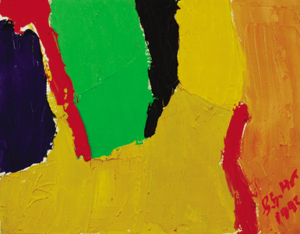 Glyn Hughes was born in north Wales in 1931 and educated at Holywell Grammar School.

In 1959 Hughes met Christoforos Savva (who had studied under André Lhote in Paris), when they were both exhibiting at The Ledra Hotel (there were no galleries at the time).

The following year, in the spring of 1960, he and Savva opened the island’s first gallery and cultural centre of its kind, the Apophasis, with the aim of launching contemporary art in Cyprus. This was housed in Sophocleous Street, where Savva lived, and exhibitions where held in the outside courtyard.

The same summer, when Cyprus gained independence, the gallery moved to Apollo Street, were Hughes and Savva exhibited their work and the work of other artists. Lectures and discussions were held with speakers like the great Russian film director, Sergei Bonderchuck.

While with Savva at Apophasis, Hughes produced work influenced by the European avant-garde. The independence of Cyprus (1960) could not be a better time for creativity. This work is from this great period of modern Cypriot art.
Glyn Hughes was born in Wales in 1931 and studied Fine Art at Bretton Hall in Yorkshire. He moved to Cyprus in 1956 to teach. In 1960, together with Christoforos Savva, he founded Apophasi, the new republic’s first gallery.
In 1971 he created Synergy, an event that combined conceptual and environmental art that took place every year until 1974.

In 1975 he started a fruitful partnership with the German theatre producer Heinz Uwe Haus (in Cyprus and abroad), and with The Theatre Organisation of Cyprus. He has designed sets and costumes for modern stage productions in Cyprus, Athens, Thessaloniki, Epidaurus, Kalamata, Edinburgh, Berlin and the USA.
He has lectured both in Nicosia and Athens on Cypriot art, Berthold Brecht, William Hogarth, German Expressionism and other subjects.

He has exhibited in solo shows in Athens, London, Germany, Switzerland and Cyprus.