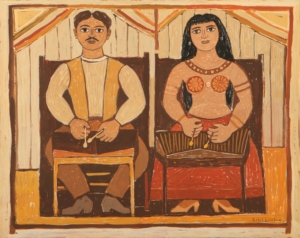 Giorgos Sikeliotis was born in Smyrni and in 1922 he moved to Athens.

His early childhood memories recall the refugee camps in Kessariani, something that would greatly influence in his work, throughout his life.

In 1935 he enrolled at The School of Fine Arts, Athens, where he studied painting under Spyros Vikatos and Constantinos Parthenis.

His work is centred around the human figure, maternity, family, everyday life and religion. He works mainly in oil, in an expressionistic manner using thick brush strokes, usually in earthly colours.

Giorgos Sikeliotis has had numerous solo exhibitions. In 1960 he was nominated for the Guggenheim Prize. In 1975 The National Gallery, Athens organized a large retrospective and later, in 1983, they organised an exhibition of his works on paper. In 1976 he exhibited at Art Basel. He participated in a number of prestigious group exhibitions such as: at the Galleria Nazionale d’Art Moderna in Rome in 1953, in Montreal in 1954 and 1958, in New York in 1956, at The Alexandria Biennale in 1957, in Helsinki in 1960, in Germany in 1961, in Belgrade in 1962 and in Moscow in 1963.