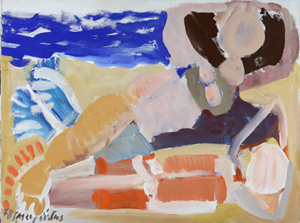 Giorgos Mavroidis was born in 1912 in Piraeus. His father was descendant of one of the oldest families in Larnaca. He spent his childhood in Cyprus, and he studied law and political science at Athens University.

In 1947 he entered the diplomatic corps until 1959, when he was appointed as professor at the Higher School of Fine Arts of Athens. Between 1975 and 1977 acted as a director and later on as a president of the school. He is self-taught. He started painting systematically when Second World War came to an end. During 1950 till 1952 he lived in Paris, which helped him study in depth the problems of contemporary trends. Besides his drawing talent, he developed intensive writing activities, composing novels and poems.

He has shown his work in one-man exhibitions in Athens, New York etc. The National Gallery-Alexandros Soutzos Museum in Athens organized a retrospective exhibition of his work in 1986, which was also shown in Cyprus at the initiative of Ministry of Education. He took part in several group exhibitions: as a member of the Armos group during 1948, 1953, 1959; at the “Twelve Greek Artists” exhibition at Redfern Gallery in London n 1960; at “Contemporary Greek Art” exhibition at Smithsonian Institute of U.S.A in 1961; at Antwerp exhibition “Contemporary Greek Artists” in 1964; and in 1985 at the “Mnimes-Anaplasis-Anazitisis” organized by EPMAS.

Giorgos Mavroidis represented Greece at international exhibitions: at Sao Paolo Biennale in 1955 and 1957, where he received euphemistic mention; at Alexandria Biennale in 1962; and at Venice Biennale in 1966.

He was honoured with the Award of Excellence in Fine Arts by the Academy of Athens in 1995 for his contribution to art and intellectual life and in the same year he was given the State Prize of Arts.

His works can be seen in public and private collections of Cyprus, Greece, U.S.A, England, Switzerland etc.