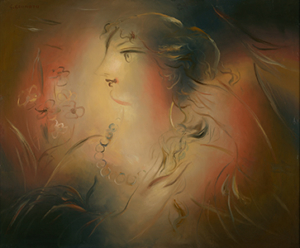 Georgios Gounaropoulos son of a Greek Fisherman from Somopolis, Bulgaria, came to Greece as a teenager and entered the Athens school of fine art.

From 1919-1923 he continued his studies at the Parisian academy Julien, in Saumiere.

His first solo exhibitions in Athens were met with harsh criticism from the establishment.
Yet, his patience and persistence helped him to establish himself in the end.