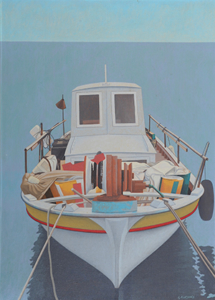 George Kotsonis was born in Palaechori in 1940.

In 1958 he graduated from the Limassol School of Commerce. He went to England where he studied painting at Saint Martin’s School of Art in London. From 1960 until 1963 he continued his studies at the Academy of Fine Arts in Peking under Professor Ai- Choun –Sin. Finally, in 1963 he continued his studies at the Higher School of Fine Arts in Prague under Professor Antonyn Pelts. In 1967 he received his Diploma in painting and the title of Academic Painter.

He returned to Cyprus and since then he permanently lives in Paphos and he works as an art teacher in Secondary schools. Besides painting he specializes in mosaics and monumental painting. George Kotsonis is a member of the European artistic group “Europe 24”.

He has taken part in more than a few group exhibitions, which the most important are: the exhibition in 1975 at Commonwealth Institute in London; in 1975 at the Panhellenic Exhibition in Athens; in 1977 at the Museum of Contemporary Art in Belgrade; in 1984 at the National Gallery in Athens; in 1985 at the National Gallery in Budapest; in 1986 at the Triennale of India in New Delhi; in 1987 at the Artists Hall in Sofia of Bulgaria; in 1989 at the Cypriot Group Exhibition in Moscow; in 1992 at the “Europa 24” exhibition at Szombathely Gallery in Hungary; and in 1994 for one more time with “Europa 24” at Angermuseum Erfurt in Germany.