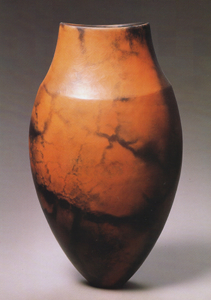 Gabriele Koch was born in Germany and now lives and works in London. Her work has been shown by many galleries and museums in U.K and abroad. The Victoria & Albert Museum, the Royal Scottish Academy in Edinburgh, the Museum fur Kunsthandwerk in Frankfurt and the British Crafts Centre are amongst them.

Gabriele Koch is using pinching and hand-coiling techniques, which require no equipment at all. It is a primitive technique and it allows the artist great freedom and opportunity to build pots of prodigious size. She has devoted herself to exploring the technique of smoke-fired burnished ceramics. Because of the peculiar process, no one pot can ever be the same as another in pattern or colour.

Tony Birk writes in the catalogue of her latest exhibition “a pot is a membrane between an inside space and an enclosing space. Gabriele’s work can be seen in terms of the tension between the two, … she is sharing an agenda with certain modern sculptors, notably R. Whiteread and Anish Kapoor, and it is not a surprise that one of her early collectors is Sir Anthony Caro.”