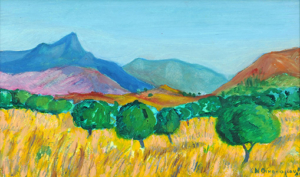 Costas Economou was born in Kissonerga village of Paphos in 1925.

He graduated form the Teacher’s College Morphou in 1945. He attended art and pedagogic classes at Kings Alfred’s College in Winchester for two years (1956-1957) and from 1971 to1972 he continued his studies at the Institute of Education in London. In parallel to his studies at the Institute of Education, he attended evening painting lessons at St. Martin’s School of Art. He worked as a teacher, professor and inspector of Art from 1945 to 1985.

Costas Economou has also written articles on art themes in magazines and newspapers. Finally, he has written an analysis of the work of Christophoros Savva, which was published by the Cultural Services in Nicosia in 1988.

His work can be seen at the State Gallery of Contemporary Cypriot Art, the Paphos Municipality, the Corfu Municipality, the Smolyan Gallery of Bulgaria, the Archbishop Makarios III Foundation, at several Banks and private collections in Cyprus, Greece, England, Germany, Austria, Holland, Finland, Italy, and U.S.A etc.