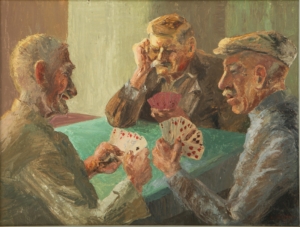 He was born in Psimolophou, 1917 and died in Nicosia the October of 1981. After he finished primary school, he worked as carpenter with his father. In 1945 he opened his own workshop in Nicosia and worked as sign-maker and designer of commercial posters. He also used to work with oil painting and engraving with he learned from Telemachos Kanthos. From the end of the 1960s he experimented with the creation of abstract works of art. In 1972, he took part in the Venice Biennale with abstract engravings.

He participated in several group exhibitions: in 1947 at the “Pan Cyprian Artistic Exhibition”, Nicosia; in 1955 and 1956 at Apofasi Gallery, Nicosia; in 1962, at the 6th Universal Festival Moscow by involving himself at the Cypriot team; in 1962 at the “Exhibition Eighteen Cypriot Artists”, Athens; in 1963 at Alexandria’s’ Pineal; at the Pan-Hellenic Exhibition in 1965 and 1971; at the “Exhibition Four Cypriot Artists” at Pushkin Museum of Moscow in 1967; at the Venice Pineal in 1972.

His work can be found in public collections in Cyprus: State Art Gallery of Contemporary Art, at the Archbishop Makarios III Foundation, at Kykkos Monastery and in private collections in Greece, Phodesia, Russia and U.S.A.