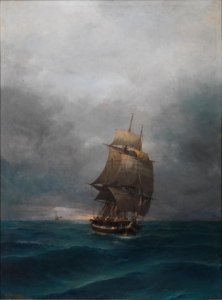 Constantinos Volanakis was born on the island of Crete in 1837.

In 1865 he moved to Munich to study at The Royal Academy of Fine Arts. He was taught by Karl von Piloty.
His main interest from early on was in seascapes. He studied 17th century Dutch Masters and Italian ‘Vedutta’ masters A. Canaletto and F. Guardi.

In 1868 he presented ‘The battle of Lissa’ at the Austrian Artists’ Society. The work was based on an incident during the war between the Austrians and the Italians. The painting was greatly admired and was acquired by Emperor Franz Josef I of Austria.

In 1877 Constantinos Volanakis exhibited ‘The battle of Trafalgar’ in London; the work was bought by the British Naval Ministry.

In 1883 he returned to Greece due to his wife’s health problems caused by the cold climate of Munich. On his return to Athens Volanakis became a professor at The Athens School of Fine Arts.

Volanakis is regarded as a great nineteenth century marine painter because of his masterful representation of ships, detailed recordings of naval battles and sensitive atmospheric renderings.