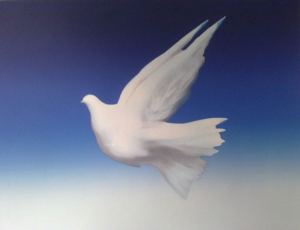 Christos Caras was born in Tricala, Greece. In 1951-55, he has studied in the School of Fine Arts in Athens, where he studied painting under Yiannis Moralis and Andreas Georgiades and sculpture under Yiannis Pappas, graduating in 1955.

Between 1957 –67 he has studied Fresco in Paris. In 1976 he founded the Association of Greek Artists and in 1973 he went to New York to continue his studies.

In 1957, on a state scholarship, he studied fresco at the École des Beaux-Arts in Paris. He remained in the French capital until 1963. During this time, he travelled extensively in Belgium, Holland, Spain, Italy and the United Kingdom. Between 1973 and 1975 he worked in New York on a scholarship from The Ford Foundation, travelling in this period throughout the United States and Canada.

From 1959 Caras experimented with gestural painting and collage. After his return to Greece, from 1963 and on, the human figure appears in his work through abstract configuration and bold colour.

In 1963, together with other artists, Caras founded the group “Tomi” and in 1976 the “Artists Union”. In 1963 he participated in the organisation of the first “Congress of the Greek Artists of Plastic Arts” and in 1977 in the symposium “Establishment of a Contemporary Art Museum in Greece”.

He held many solo exhibitions in Greece and internationally such as in 1967 at Forsythe, USA, in 1978 at Richard Foncke, Belgium, in 1979 at Salon International Bale, Basil, in 1982 at Maison de la Grèce, Paris, in 1984 at The Venice Biennale (with Andreas Georgiades), in 1985 at Gelerie am Kurfurstendamm, Berlin, in 1987 at Trosa Kvarn, Sweden and in 1990 at Metropolis Art Galleries, New York.