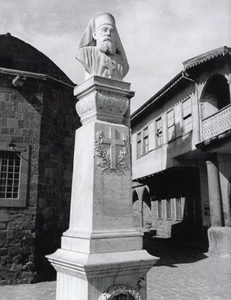 Andreas Thymopoulos was born in Prasteio of Famagusta in 1881 and died in Nicosia in 1953.

He studied on a scholarship from the Archbishopric of Cyprus at the Higher School of Fine Arts in Athens, under the sculptor Georgios Bonanos. During the years of his studies, each year he was receiving the first prizes, the Averophio and Chrysovergio. He graduated in 1906 and he returned to Cyprus.

In 1907 he was appointed as a drawing and calligraphy teacher at the Pancyprian Gymnasium until 1913. He also taught sculpture and painting in the pedagogical section. From 1913 until 1920 he worked as a freelance artist, while his reputation travels outside Cyprus.

In 1920 Andreas Thymopoulos went to Smyrna to teach art at the Evangelical School of Smyrna, after an invitation of the school. He stayed in Smyrna until 1922 and then he returned to Cyprus. Since 1936 he acted as a teacher at Pancyprian Gymnasium and at the same time he kept a sculpture studio.