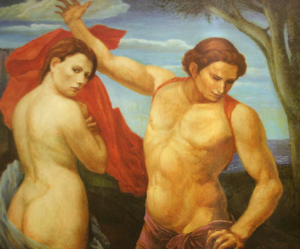 Andreas Chrysochos was born in Milia village of Famagusta in 1929.

He graduated from the College of Morphou in 1950.

He worked as a teacher, art professor at the Pedagogical Academy and as an Art Inspector. He writes art critics and he is involved in icon-painting and calligraphy.

His work can belong to public and private collections in Cyprus and abroad.