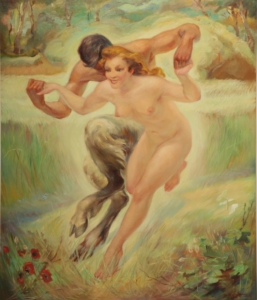 Art historian Nigel Spivey said in his recent BBC Two series How Art Made the World, ‘One image dominates our contemporary world above all others: the human body’. It was the subject that dominated the work of Alexandros Alexandrakis.

He was born in Athens in 1913, and long before he entered the city’s prestigious School of Fine Arts, Alexandrakis displayed a precocious talent, drawing and painting whenever possible. At the age of 17 he exhibited 23 pieces of work at a group show organised by the YMCA.

When he graduated from the art college in 1937, he was the first student ever to win four major awards presented for portraiture, clothed and semi-clothed life drawing and painting, and composition. As Europe teetered on the brink of its devastating war, Alexandrakis participated in numerous exhibitions until 1940, when he and his five brothers were drafted into the army.

The war proved to be a seminal experience for Alexandros Alexandrakis, who made his name as a war artist with his evocative, powerful yet poignant impressions of the horrific campaign against the Italian fascists fought in the mountains of Albania. It was during the heat of war while rapidly recording images on whatever scraps of paper were available that he learnt about the economy of line.

After the war he put death and destruction behind him, to concentrate on the human form in its more joyful aspects, particularly nubile young women signifying the life-force. He forged a strong reputation in Greece and in the USA, winning numerous important awards, and was regularly invited to submit work to the Guggenheim’s exhibition of ‘National Unity, Letters and Arts’ and the ‘National Exhibition of Engravings’ in the Library of Congress in Washington.

His award-winning book The War We Fought – 1940-41, illustrated with over 100 drawings and paintings, was published in 1968, the year of his premature death at the age of 55.

His work can be found in many public and private collections in Greece and Cyprus. Notably at The National Gallery Greece, The Municipality of Athens, The State Gallery of Contemporary Cypriot Art, The Leventis Gallery, The Bank of Cyprus Cultural Centre Foundation, The Hellenic War Museum.