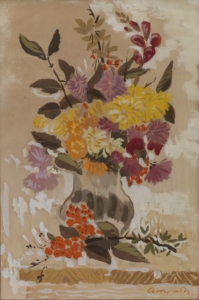 Agenor Asteriadis was born in Larissa. In 1915 he enrolled at The School of Fine Arts, Athens, where he studied painting under Georgios Jakobides, Georgios Roilos and Spyros Vikatos.

Four years after graduating, in 1925, he was appointed as a secondary school art teacher in Grevena, northern Greece. As of this time he became acquainted with the beautiful, surrounding scenery which inspired his first book “Το σπιτι του Σβαρτς στα Αμπελακια”, published in Athens, 1928.

Asteriadis was a great admirer of Greek folk art and the simplicity of children’s drawing. Thus in 1933, together with his long time friend Spyros Vassiliou, he published the book “Παιδικα Σχεδια” (children’s drawings).

Throughout his life Asteriadis worked on a number of ecclesiastical fresco commissions such as the church of the Virgin Mary at Trahones and the church of Saint Vlasios at Xylokastro, the second of which he painted together with Spyros Vassiliou. Additionally he illustrated a large number of children’s, ecclesiastical and literary books.

Asteriadis is one of the most important of a group of artists, who are collectively referred to as the Thirties Generation. They are attributed to having created a renaissance of Greek art in the Interwar years, combining the teachings of the European avant-garde whilst referencing their Greek heritage.